Impressions of the Festival: Week 1
Ari Jewell, Festival Storyteller
There’s a way that Friday evenings feel when you have somewhere to be. When some crowded room is waiting for you, when you put on an outfit for the night, when the sidewalks are going to be alive — that’s when Friday nights start to bubble with excitement. As I drove to Great Barrington last Friday, I was reminded of this feeling, which I rarely felt in the past year. It had been raining all day, but even in the late afternoon overcast, the world seemed bright.

Despite the rain, Berkshire Busk! was on the menu. A typical evening of the festival would feature several performers lining downtown Great Barrington, but tonight, in an effort to avoid the worst of the weather, only three groups were slated to perform — from the shelter of 20 Railroad Public House. Up first was Tante Friedl, an international folk duo made up of Dan Wall and Magdalena Kriss. The rain mercifully held off for the first hour and a half, and Dan and Magdalena set up on the sidewalk, in front of a dark red door next to the restaurant.

With Dan on the banjo and Magdalena on the accordion, they tore through a set of folk tunes in all sorts of languages. If the thought of a set of multilingual folk songs sounds a bit esoteric to you, think again — as pedestrians wandered by and restaurant goers sat down to dinner outside, I watched the energy and delight of Tante Friedl rub off. I was certainly not the only one grinning; more than once I saw dancing in the street.

When I asked Dan and Magdalena about their previous experiences busking, they were quick to describe it as “humbling.” When you busk, Dan said, you are “dealing with a world who doesn’t necessarily want to hear you play.” While that can mean butting heads with difficult people, it can also mean forging a spontaneous and meaningful connection with the audience. Human connection, Dan and Magdalena said, is the most important part of busking. 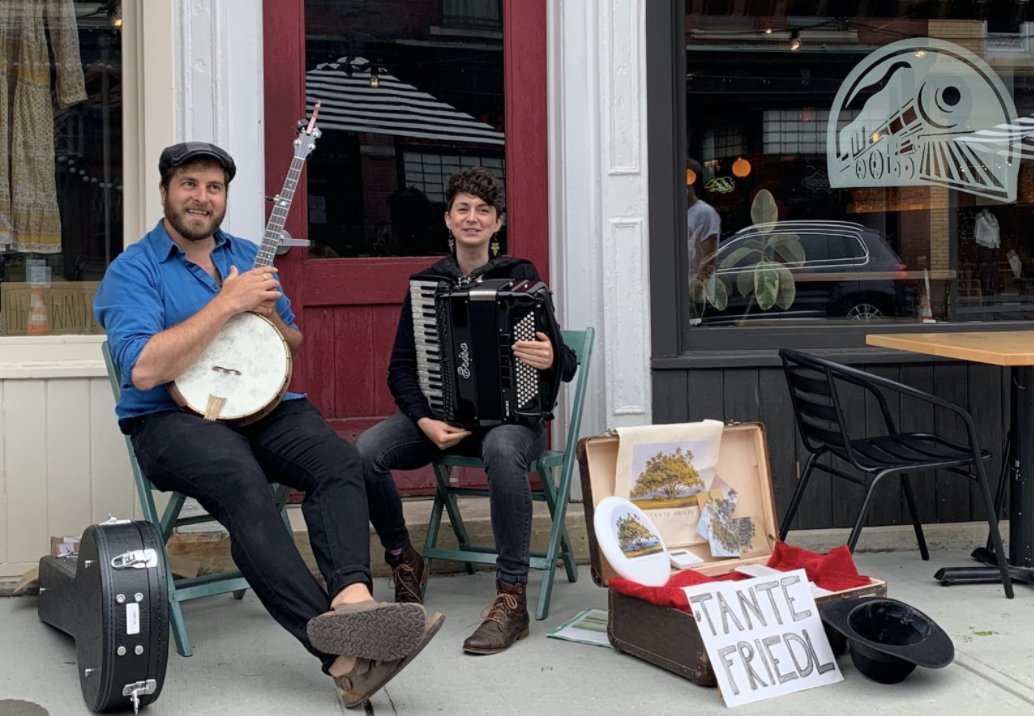 Tante Friedl, July 2, 2021, Great Barrington, Massachusetts Photo: Gene Carr
Soon after Tante Friedl finished their set, the long-threatening sky lurched to life, and began dumping rain on Railroad Street. Sitting at the bar in 20 Railroad Public House, I watched through the window as pedestrians sprinted for cover. Inside, though, it was peaceful. In the corner, Egremont’s Vita Kay was singing easy and warm jazz tunes, accompanied by guitarist Mark Phillips.

Unlike the energetic Tante Friedl, Vita Kay barely looked up at the world around her, often performing with her eyes closed and clearly absorbed by the music. She likes this busy atmosphere, she told me, finding solace in “the fact that nobody cares.” Her genre is mainly “bossa nova,” which emerged in Brazil as a combination of jazz and samba. To me, it sounded like the low yellow lights looked: inviting, peaceful, and comforting.

As the night wound down, I was thinking about what made live music magical. From the bar, the bonus percussion of a cocktail shaker added to First Take’s rhythm section. Eugene Carr took a verse on “Bésame Mucho,” and I watched as restaurant goers stood in the doorway with rapt attention, smiling slightly. It’s these little moments, I decided — these moments where the magic is not grand or elaborate; rather it’s simple, happy, and ours.

I hope you join us this weekend and find your own small delights.