Impressions of the Festival: Week 3
Ari Jewell, Festival Storyteller
On Friday night, Mary Ann Palermo sang a swinging cover of Van Morrison’s “Moondance,” her eyes on the horizon. She performed with a music stand in front of her, but her eyes were anywhere but the page. The words to Morrison’s classic seemed to be firmly planted in her brain, as they are in mine. When I was a young kid watching live music, I didn’t fully understand that the music I knew — the music my parents played in the car or while cooking dinner — was also known by others. When I heard a familiar song performed live, I was thrilled. The performer and I were sharing a joy that had, until that point, felt solely mine. Whatever loneliness had colored that joy was gone.

I still feel a measure of that same thrill when I see a live cover of a song I love. Unlike my younger self, I now understand that many, many people know songs like “Moondance.” But I still feel chosen whenever I hear a cover of a song I love; I feel the same way I did when I requested a song at the roller-skating rink in elementary school. And when I see others singing along with recognition shining in their eyes, I am comforted, I have a sense that I’ve come home.

Before wandering towards Mary Ann Palermo & First Take, I stood for a while by the crosswalk watching Lucky 4. Lucky 4 is a jazz combo featuring guitar, fiddle, drums, and an upright bass. When they performed, they lined the sidewalk: the bassist stood on one side facing the other players, creating a sort of jazz tunnel through which pedestrians walked. In a space where people walk mindlessly each day, they made a mini venue, an immersive musical experience.

As I stood watching Lucky 4 (whose music was so good that there are emphatic expletives in my notes), they launched into a rendition of “Exactly Like You,” a song so routinely covered that I’m not sure an original or canonical version even exists in most of our minds. I was pleased to recognize the song, and even more pleased when, just a few minutes later, I heard Mary Ann Palermo & First Take begin their own version of the classic tune. When songs are repeated with this frequency, I think there’s a specific acknowledgement taking place. It’s as if each performer is saying, “Here is a pathway to pleasure, a pathway so foolproof and well-worn I know you will love it.” When a song like “Exactly Like You” is performed, it feels to me like reciting scripture. 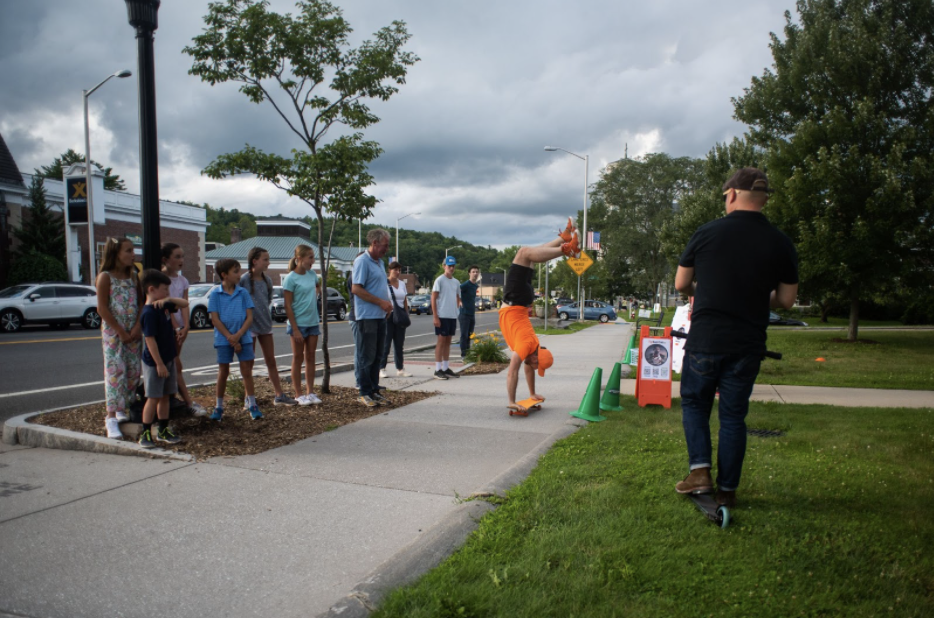 Photo by Ari Jewell.
This sense of familiarity and comfort was also evident in Lucky 4’s performance. Despite the obvious technical complexity of what they were playing, the notes rolled off their fingers (if you will) with a striking ease. That ease was matched by their demeanor; I watched as they laughed with each other and decided on the spot which songs were up next. At one point, Carli Scolforo, the Festival’s Instagram Live host, asked the band where they were from, and what they did. The bassist quipped, “we’re from right here and we do this!”

This comment made me think of what I wrote last week, about how live music can feel grounding, reminding us of all that is precious about being here right now. And this comment also suggested that this was an everyday occurrence, that at all hours Lucky 4 was on the corner, drawing a crowd. And, after all, why couldn’t that be true? For me, this is one of the central tenets of Berkshire Busk! This festival is simply showing us what talent and possibility already exists in and around Great Barrington. What feels remarkable about Berkshire Busk! is, actually, ordinary.

Not long after arriving at the festival on Friday, I met Ben Webb, who works at Moon in the Pond Farm. He was closing up their Friday afternoon farm stand as the festival began and stopped me to ask what my vigorous notetaking was all about. I explained my job, and he began to tell me his impressions of the festival. Like everyone I’ve talked to, he was totally enthusiastic about Berkshire Busk! But beyond enthusiasm, Ben was emphatic that this festival is only the tip of the iceberg of what Great Barrington ought to be like.

He kept repeating the phrase “street culture” to me; this is what he is invested in. “I wish it was a thing to just hang out in town,” he said. “This should be the status quo… this place is cool, it’s a wonderful little town!”

As I write, I’m thinking about “street culture,” and how I could define, or imagine, that phrase. For me, street culture is about the art and connection happening inside museums, music venues, and online, coming out to the sidewalks and the streets. It’s about community, and it’s about the comfort of leaving your house and still being at home. 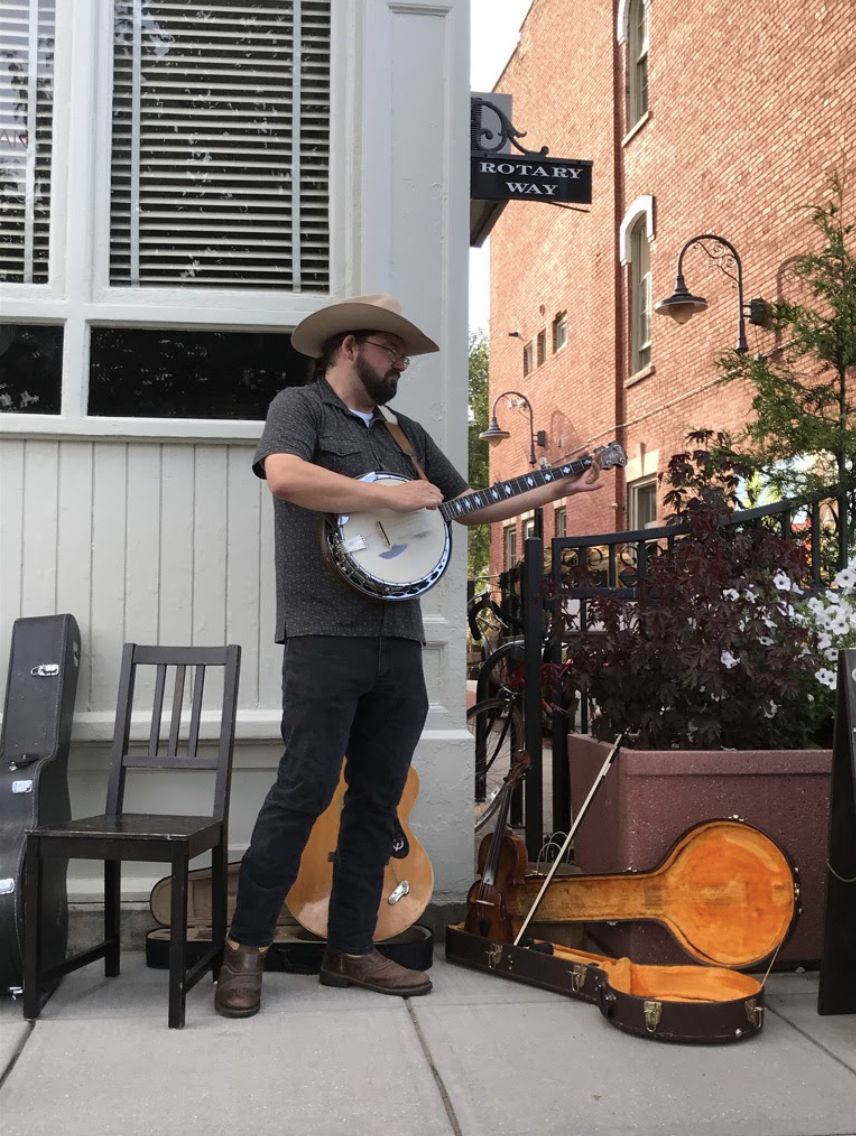 I’m realizing that, up until this point, nearly this entire blog post has boiled down to recognizing comfort. The comfort of hearing a familiar song, the comfort with which Lucky 4 perched on the street corner like they had been there forever, and the comfort of the streets becoming a center of community and home.

But, before I wrap up, I want to talk about covers for a second longer. Beyond the joy of familiarity, covers can have an element of shock as well. Sometimes the best rendition of a familiar song is one which is altogether unfamiliar. For example, Aretha Franklin was a master of this skill. I’m thinking especially of her cover of “Eleanor Rigby,” in which she lyrically changes the entire plot (singing as Eleanor Rigby) and barely imitates The Beatles’ production.
On Friday night, I stood for maybe an entire minute watching David Reed before recognizing the song he was performing. He played a three-string cigar box guitar with a slide on one finger, and tapped a tambourine with his left foot and a box drum pedal with his right. Reed’s talent is remarkable — I stood with Berkshire Busk! director Gene Carr as I watched, and when Reed began to play, Gene said to himself, “Oh my god!” 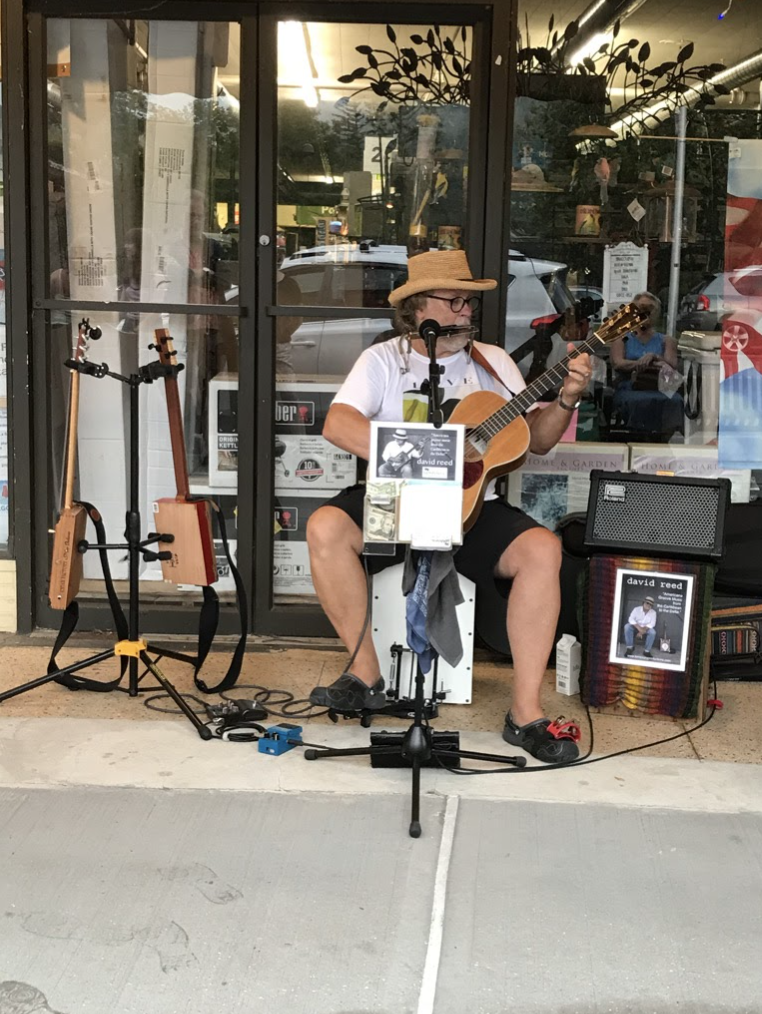 Photo by Ari Jewell.
Eventually we realized what song he was performing: Paul Simon’s “Diamonds on the Soles of Her Shoes.” On a slide guitar, playing in a style he calls “groove music,” Reed’s version of the song is so unlike Simon’s. It’s hard to imagine successfully messing with a song so well-loved and admired, but somehow Reed did it — even slipping into a brief chorus of “The Lion Sleeps Tonight” midway through the song.

The delight of watching Reed perform was different from hearing versions of “Moondance” and “Exactly Like You” earlier in the day. I wrote in my notes, “mostly I feel like I’m watching genius.” While the other covers I’d heard that day had felt like generous recognitions of the love we share for classic tunes, this performance felt miraculously new. For me, his performance rewrote the canon a bit — even if Paul Simon’s recording of his song will always be the same, I can never hear it the same way again. I will never hear it without this new possibility.

I feel self-conscious of the fact that, each week, my post essentially comes to the same conclusion: this live music is changing me, and it is, for me, a direct link to joy. This week, I wanted to talk about covers and comfort and that intersection of new and old, but, still, the thesis has remained the same. There is a richness here. There is a huge euphoria. And even though I’m repeating myself, isn’t that repetition needed? Don’t we need every reminder we can get of this abundant and easy joy? 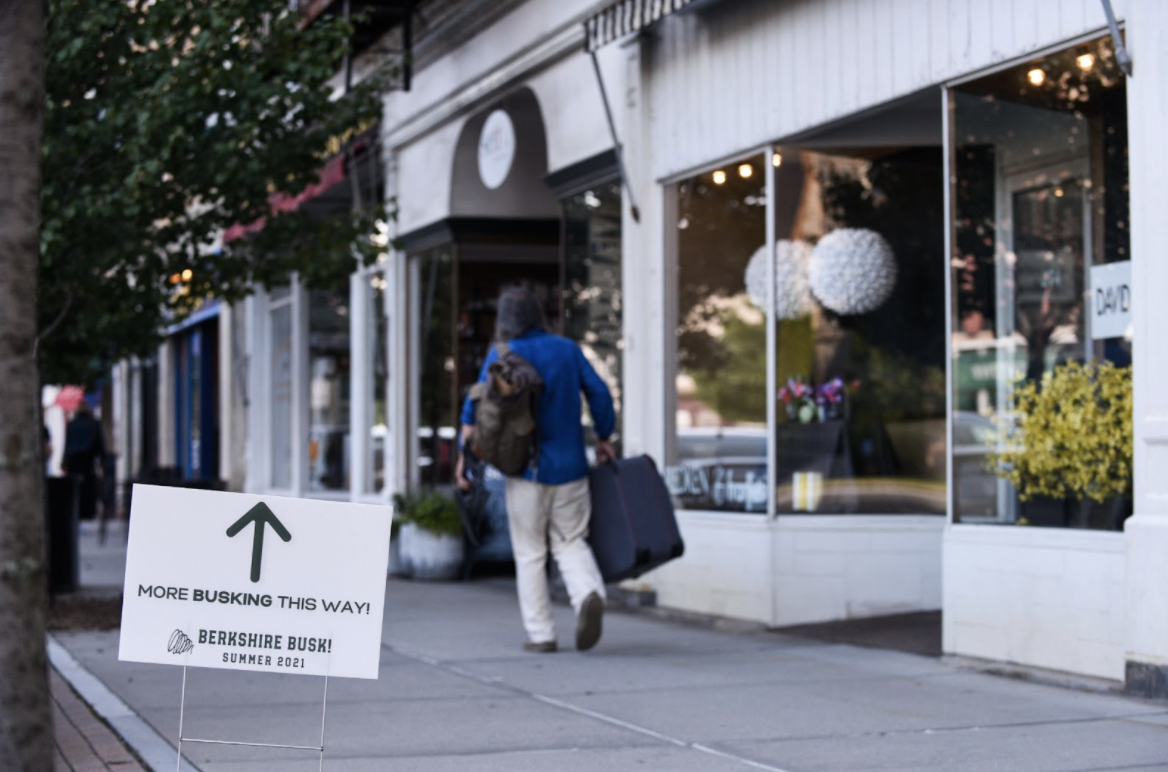