Impressions of the Festival: Week 4
Ari Jewell, Festival Storyteller
On the first day of Berkshire Busk!, Tante Friedl’s Dan Wall told me the story of Joshua Bell’s attempt at busking. In 2007, at the prompting of Washington Post columnist Gene Weingarten, Bell — one of the world’s best classical musicians — stood in a DC metro station and played his Stradivarius violin. The story goes like this: it was rush hour on a Friday morning, and in the 43 minutes that Bell performed, 1,097 people walked by. Of that 1,097, only seven stood to watch. Twenty-seven gave money. The cost of watching Bell perform from only a few feet away in a concert hall can be something like $100. On that January morning, unrecognized, he made $32 and change.

Weingarten’s story about Bell’s lackluster reception in the metro ended up winning him a Pulitzer. In the article, Weingarten was critical of the American public, writing, “If we can’t take the time out of our lives to stay a moment and listen to one of the best musicians on Earth play some of the best music ever written; if the surge of modern life so overpowers us that we are deaf and blind to something like that — then what else are we missing?” Sure, Weingarten admits, the DC metro isn’t the optimal environment for appreciating art, but what does this experiment reveal about our readiness to appreciate beauty?

But when Dan told me this story, he wasn’t critical of the unappreciative commuters — on the contrary, he had a bone to pick with Joshua Bell. No one can dispute Bell’s virtuosic talent, but, Dan said, he has some things to learn about busking. Bell performed with a hat pulled over his brow and with his violin case just inches past his toes. Experienced buskers know that the ability to connect with passers-by can make or break the success of the performance. Bell was so self-contained that, from Dan’s perspective, it was no surprise that he didn’t garner the attention a highly acclaimed virtuoso ought to.
‍
On Friday night, I spent a long time watching Lucky 4, just as I had the week before. Last week I wrote about how comfortable they seemed to be, even while playing technically complicated tunes. This observation was still rolling around in my brain this week, I think because it is kind of puzzling to witness. Usually when I witness great musical talent, it’s accompanied by superstar diva-dom or evidence of profound exertion. (The image in my head right now is Luciano Pavarotti at the end of “Nessun Dorma.”)
‍
But when Lucky 4 finished a tune, they smiled and took their time getting to the next one. They chatted with the audience a little, then launched into perfect three-part harmony. I’m particularly enamored with this band (as you might have noticed), and I don’t think I’m alone in that. At one point during the evening, I watched a pair sit down on a bench in front of Lucky 4 to watch; when I returned maybe 45 minutes later, they hadn’t budged.
‍
I think the recipe for Lucky 4’s success is located in the same place that Joshua Bell failed: their talent is inviting. I mean, certainly it helps that they are performing at a busking festival and Bell was performing in a metro station full of rushed commuters, but I think my point still stands. Watching Lucky 4, I had the sense that I was just as much a part of their evening as they were a part of mine. 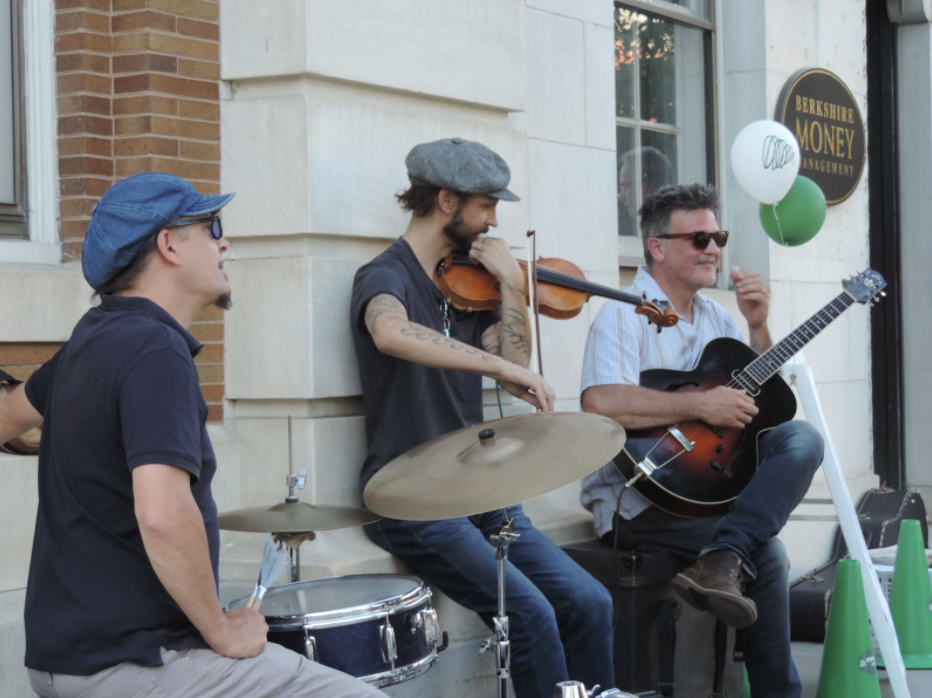 And Berkshire Busk! is full of moments of invitation. Harry & Karen wrote on their sign, “Love, Music & Healing Tour.” When I asked what that meant, Karen told me, “most of the songs we choose are in a vibration of love.” I didn’t exactly get an answer to how one knows if a song is in a “vibration of love” or not, but I think the intention of sharing something abundant and joyful is what counts.
‍
Some more moments of invitation:
‍
Someone I shared a bench with while watching GypZbilly got up midway through the set to dance with their full body. I wondered if this was a moment of unusual inhibition for them, or if this was within the bounds of their regular disposition — I couldn’t help but suspect that Berkshire Busk! had, in part, given permission for this kind of exuberance.
‍
I approached Barry Kay as he was in the middle of a rendition of “The Boxer” by Simon & Garfunkel. A couple of people stood watching, and both were singing along, harmonizing with the chorus. After he finished the song, Kay said, “Let’s do another sing-along!”
‍
In his banter with the audience, New YAK City dancer Teflon made a lot of jokes about being a Black performer surrounded by a white audience. I wondered if this was an uncomfortable audience for him, but when I asked him about the racial dynamics of performing at Berkshire Busk! he said, “Who embraces it embraces it… when you dance you speak a language.” Even though he was quick to point out the differences between himself and his audience, he has faith that dance can be an agent of connection. 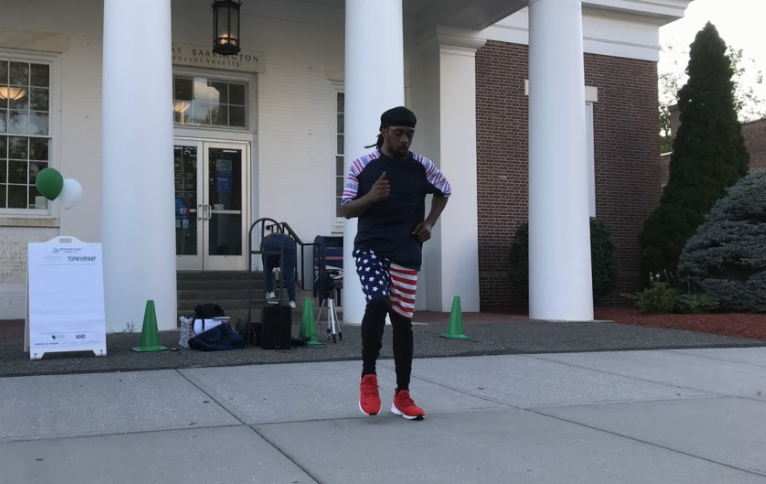 I grew up in the world of classical music; I’ve probably been to more classical music concerts than any other kind. Maybe I feel this way because I’ve been a student of classical music for essentially my entire life, but it’s often felt to me that the more I understood a piece of music the more I would enjoy it. Classical music certainly touches a deep and unintellectual place of wonder within me, but I also have found joy in recognizing Sonata form when I hear it, or paying close attention to a string player’s technique, or reading the program notes before the concert.
‍
This is partly personal preference, but I think it’s also impacted by the culture surrounding classical music — a culture which is often academic, expensive, and focused on long-dead white composers. Don’t get me wrong, classical music is a source of great comfort and joy to me, and that comfort and joy is and ought to be accessible to everyone. But, all the same, I think that classical performers — like Joshua Bell — have something to learn from welcoming buskers.
‍
What happens when the audience is invited to be a part of the process? When their attention is not expected, but earned? What happens when knowledge or decorum isn’t required of an audience — just simple, human delight?