Impressions of the Festival: Week 5
Ari Jewell, Festival Storyteller
Before Berkshire Busk!, I’d never been to a town like Great Barrington. It’s artsy, but not too weird, fashionable but not alienating, and a small town with all the charm but none of the isolation. The streets are busy on Friday nights, and pedestrians are dressed in a way I take to mean that they intend to be looked at, or even admired. I think this is about the wealth of the town more than anything else, but it’s certainly cultural as well — there’s something about Great Barrington that seems to encourage expressiveness.

Jeff Caminiti, a local restaurant owner, tells me that Great Barrington has “developed into sort of a mecca.” It’s more than a town — it’s a destination. All sorts of people seem to be comfortable on a Friday night on Main Street; there are young parents with babies, older couples, people on a night out, people just passing through. From the open windows of cars, I hear just as much hip-hop as I do country music as I do pop. Last Friday, “(Without You) What Do I Do With Me” by Tanya Tucker was playing from an old pickup as I crossed Main Street onto Railroad Street. I watched the driver sing along with the country hit and smiled to myself — with this song briefly washing over the intersection, it seemed as though a public celebration of music had started before the evening’s Berkshire Busk! festivities had even begun.
‍
My evenings usually go like this: after checking in at Berkshire Busk! headquarters, I walk back down Railroad Street and turn right on Main Street. I always intend to make an initial lap around the festival and then return to all my favorite performers, but that initial lap rarely goes to plan. Last weekend, I passed Willy Welch as he began a song, and it sounded so good that I stopped to listen. One of the principles of this whole experience, I remind myself, is simply following what feels exciting and joyful. Willy was fingerpicking along with the melody he sang, and I sat on a bench for a couple of songs, swaying, a little captivated.
‍
I stood up and continued down Main Street to where Paper Anniversary was playing to a gathering crowd. Paper Anniversary is composed of husband-and-wife duo Andy Stuckey and Katherine Slingluff, and their songs orbit genres like country, bluegrass, and Americana. On Friday night, Paper Anniversary also featured frequent appearances from their kids, Maggie and Mo. Bands composed of families or partners are among my favorite live performers (the bands Shovels and Rope and Tedeschi Trucks Band come to mind). I delight in noticing their little moments of intimacy, the way that they exchange private smiles or give small gestures of encouragement.

I noticed all this watching Paper Anniversary, but their identity as a family band extended beyond the subtext of their performance. Their songs and performance often referred specifically to their partnership and family life: their first album, “Signature Confessions,” released in 2013, is composed of songs written by Andy and Katherine during — and about — the first year of their relationship. 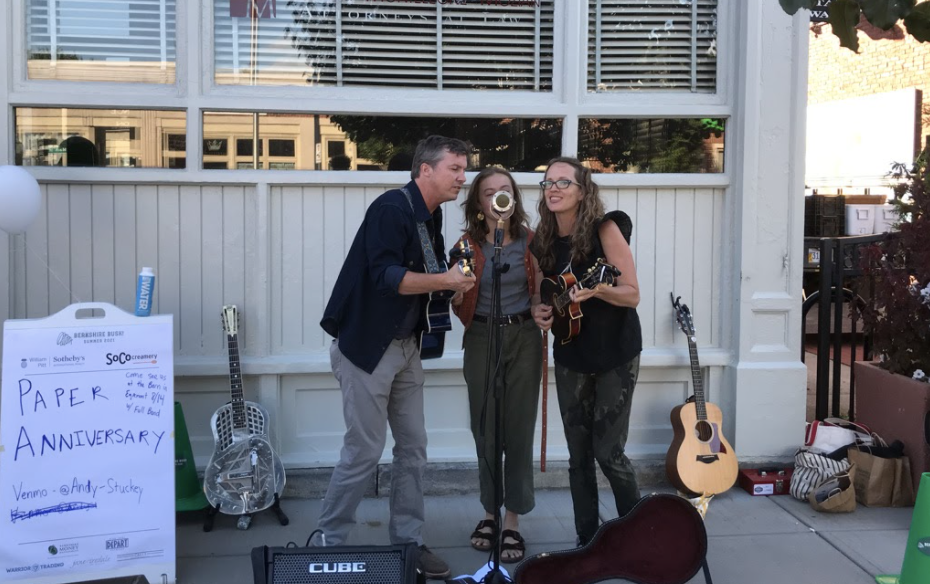 I loved how good Paper Anniversary was, not only because it’s always delightful to watch a good band, but also because it gave me a second-hand sense of pride, like that feeling you get when the harmonies in the car or in the living room are especially good. Like Paper Anniversary, I come from a family of music-makers, and watching them perform felt like coming home. Each time I returned to watch them perform on Friday, it seemed as though the crowd had doubled in size; I don’t think I was alone in this feeling of comfort.

When I finally left the patch of mulch from which I admired Paper Anniversary, I made my way to Natalie Lewis, a sixteen-year-old rising junior at Monument Mountain Regional High School. She told me that she started getting serious about playing guitar during the pandemic, and that Berkshire Busk! was her first live performance. This floored me; she seemed totally at ease in front of a mic with her shiny black acoustic guitar in hand. 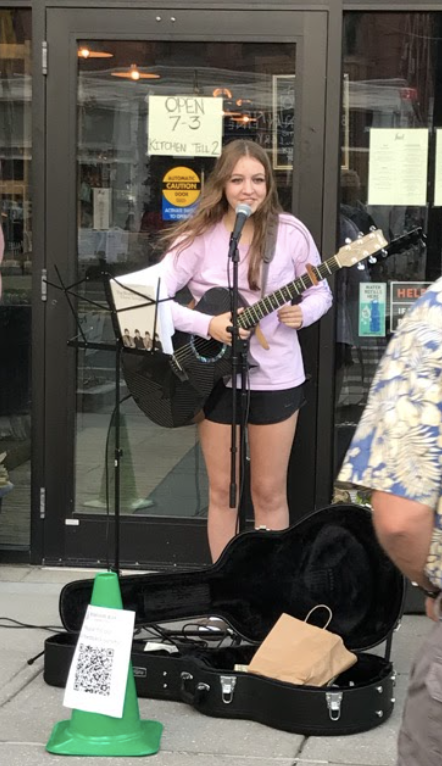 At the end of the evening, Natalie played from a thick Beatles songbook (a band she names as her musical inspiration). I recognized the book as one that sits on my childhood bookshelf, gifted to me when I was spending a lot of time noodling around on guitar. Once again, I was reminded of the feeling of making music at home, of times when I would play a song in one room and hear a family member chime in from down the hall or up the stairs.

I feel a little silly to be writing and thinking about the music made in homes when Berkshire Busk! — and all live music right now — is celebrating finally making music in public again. Perhaps the fact that my mind keeps returning to a sense of home is a testament to the comfort that live music is bringing me. Or maybe it’s just a sign of where all music begins: in our most safe and sacred heart-places, in the homes we make inside ourselves.