Impressions of the Festival: Week 6
Ari Jewell, Festival Storyteller
As I approached downtown Great Barrington on Friday night, it occurred to me that I have been entering each of these evenings from a place of deficit. I feel like I must milk these evenings for all they are worth, like someone eating their last meal. In part, I think this tendency is motivated by a fear which says, “just because it’s good right now doesn’t mean it will be good forever!” I feel like I need to see every performer, catch every perfect moment, and write down every urge or feeling or idea before it passes.

On one hand, I think this is a perfectly human response, leading me to a greater appreciation for what is in front of me. On the other hand, I know that this instinct is one which capitalism has buried in each of us: the idea that we have an insatiable emptiness which must be filled with experience and product. And while capitalism’s emptiness is largely artificial, the void created by the ongoing pandemic is certainly real. As I am entering another evening of Berkshire Busk!, I know that somewhere in my body I am remembering the crowd that I joined in February 2020, not knowing it would be my last concert for more than a year.

I don’t fault myself for approaching joyful things cautiously (and hungrily) after a year of losing many previously dependable joys. But when I realized that this was the framework from which I’d been approaching the festival, I felt instantly annoyed at myself. Because, at least in my eyes, Berkshire Busk! is all about abundance. It’s saying, “Look how much talent is in this community!” So I tried to redirect my focus for the evening — where could I turn for a sense of abundance? 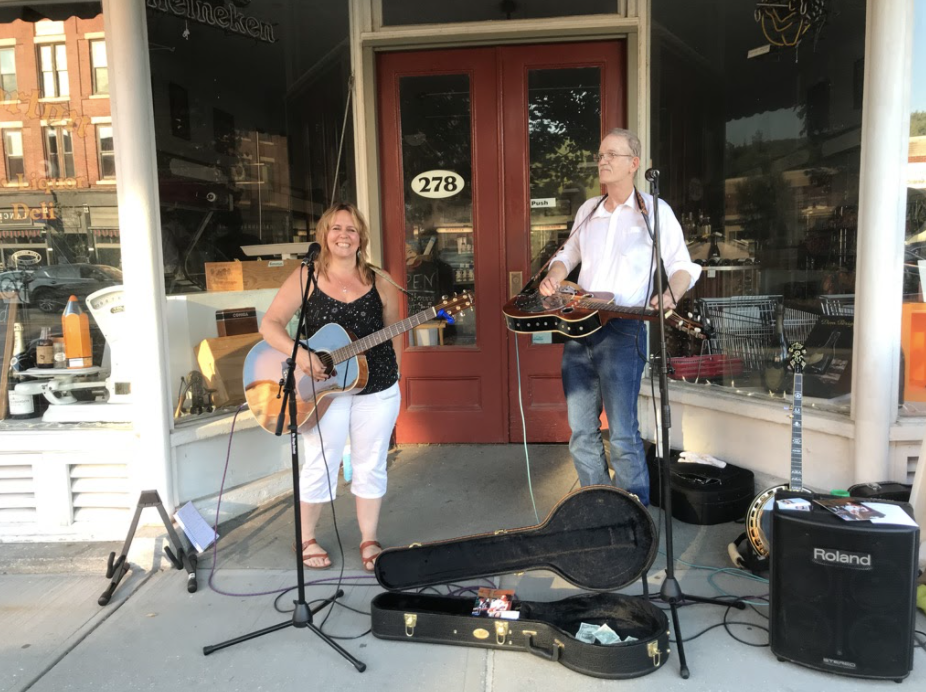 A few minutes later, outside of Carr Hardware, I began to notice the abundance I was looking for. A few weeks ago, I met David Reed and was floored by his “groove music” cover of Paul Simon’s “Diamonds on the Soles of Her Shoes.” When I first recognized the cover back in July, I was quick to record sections of it on my phone, wanting to preserve the moment for myself forever. This weekend, David Reed was back. From his spot beneath the awning of the hardware store, he recognized me.

I wanted to hear the “Diamonds on the Soles of Her Shoes” cover again — I wanted to hear it badly — and said this to David. I took my place on a bench across from where he was set up and put down my notebook and phone. The lesson of the moment was obvious; what I had felt was a once-in-a-lifetime viewing experience was coming back around again. I sat for several minutes outside the hardware store, watching David and watching other people watch David.

At one point, I caught a glimpse of Lia Douillet in the reflection of the storefront. She was suspended upside down by her legs with aerial silks across the street from David. I nearly got up, worried that I would miss something extraordinary. But, doing my best to take the lesson from the day, I stayed where I was. 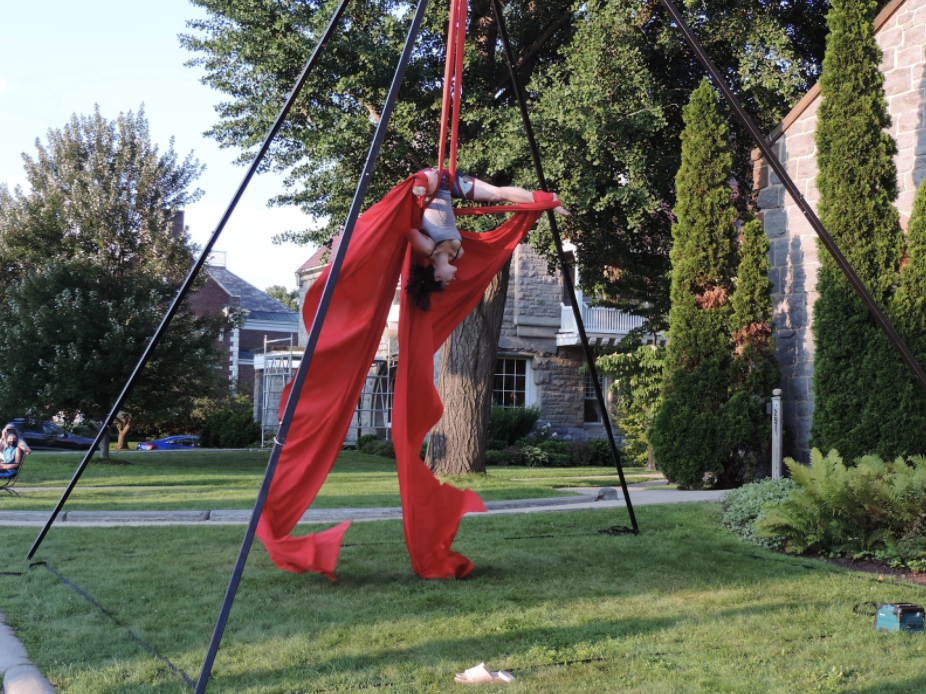 One part of embracing abundance is about recognizing that there will always be more: more remarkable music and musicians, more performers that approach the impossible, more stories that illuminate the history or meaning of each performance.

But I think there’s room to expand abundance beyond that. Maybe I’m stretching my theme a little here, but I think that all music is created to accommodate and express an abundance of emotion. When I heard Robin O’Herin belt blues and gospel tunes on Friday, I was reminded of this. Her music hit me squarely in the chest in a way that only blues and gospel singers can (in my notes I described the intensity of this music as “due diligence to the emotion,” which isn’t the most precise description, but the best one I can muster). 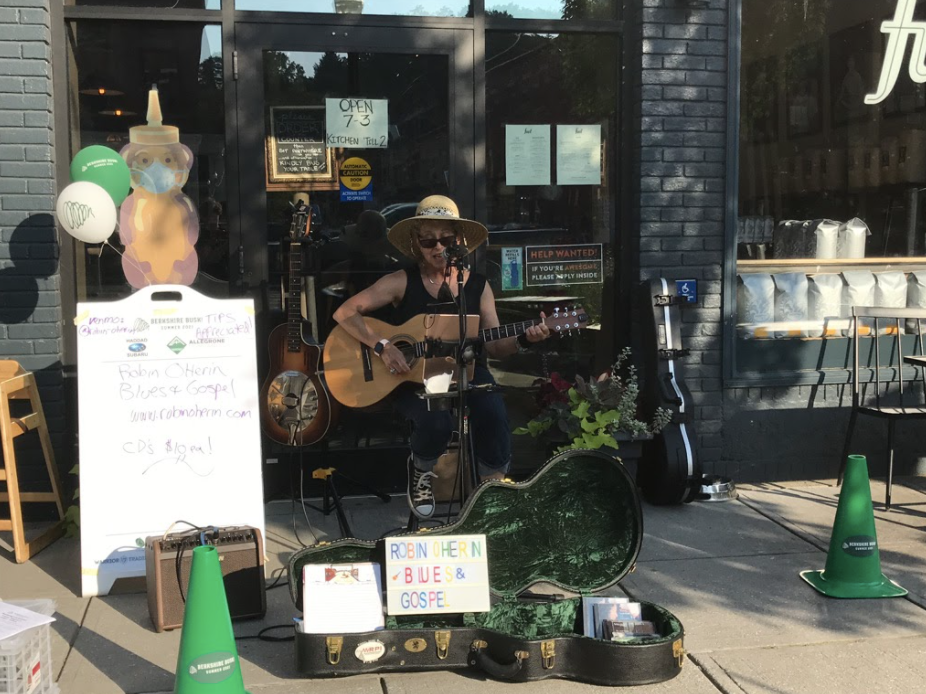 When I talked to Robin about the emotion of her music, she told me that blues musicians have historically changed the mechanics of their songs based on their feelings. The practice was called “crooked time,” and was when musicians added beats here and there to make room for maximum expression. They unraveled the limits of time signature to make space for more song, “all based on how they felt,” Robin reported.

Robin has been a professional blues and gospel musician since the early 2000s, but she’s been infatuated with these genres her whole life. As a young adult, she hoped to pursue blues music, but was sidetracked by her parents, who didn’t think that music was a valid career. Years later, when she was reflecting on someday growing old — and wanting to do so with no regrets — she realized, “oh no, I forgot to be a blues singer!” And the rest is history.

I’ve spent most of this blog post trying to cast away a sense of scarcity or deficit — as I’m sure you’ve noticed. But Robin’s story reminds me that these feelings do serve a purpose! Had she not considered that life is finite, her dreams of being a blues singer would have never been realized. The gift of scarcity is clarity: we learn exactly what is worth our time when we can’t get enough of it. I’m thankful that, for me, live performance has declared itself — many times over — deserving of every moment I have to spare.