Impressions of the Festival: Week 7
Ari Jewell, Festival Storyteller
Last Friday was my final night at Berkshire Busk! (The festival isn’t over, I just have to go back to college.) As I walked towards our headquarters, I was struck by how empty the sidewalks were. Even at 6 pm, it was stiflingly hot, and the sidewalks shimmered in a way they only do in August. I guessed that the heat was keeping everyone indoors, a guess which seemed to be confirmed by 7 pm, when the festival had livened up quite a bit.
‍
Normally, I try my best to blend into the background of the festival, as much as someone taking copious notes can. But as I began to roam Main Street at the beginning of my night, I realized that wasn’t going to be possible. I couldn’t lurk subtly in the back of a crowd when there wasn’t much of a crowd to speak of yet.
‍
Knowing that this was my last week, I was walking into the festival thinking about this storytelling project. In the past seven weeks, I’ve often been torn between trying to serve as an anonymous set of eyes and ears for someone who isn’t at Berkshire Busk! versus telling a story that is uniquely mine. (If you’ve been reading throughout the summer, you know I’ve usually chosen the latter.) The early evening quiet in Great Barrington last Friday gave me less choice in the matter — I couldn’t watch the buskers perform for other people, I had to watch them perform for me.
‍
As I’ve reflected on my role at Berkshire Busk! coming to an end, I’ve been thinking about the particularities of each of our experiences of performance. Nothing I feel will be the same thing you feel. And it’s difficult to translate what I experience to the page, but at the same time, it’s intrinsic to my whole mission here — whatever joy I find at Berkshire Busk! is the only way I know to invite you into yours.
‍
But more on that later. First, let me take you back to the festival. On the corner, Jaane Doe played a beautifully fingerpicked cover of Stevie Nicks’s “Landslide.” Most other performers seemed to still be setting up, but I found Nido Di Cuculo in front of a picturesque alleyway next to a law office. If you asked me whether or not I enjoyed Italian folk music before Berkshire Busk!, I think I would have been stumped. But I now can tell you for certain that something about this accordion and mandolin duo was a little intoxicating to me on Friday. Both looked so relaxed; they played music with the same casualness that the rest of us gesture mid-conversation.
‍
Around 6:45, the most elaborate (and thrilling) act of the evening began: stunts by “Tennis the Menace” (AKA Al Millar) who performed to a crowd at the bottom of Railroad Street. He started unbelievable, and things escalated from there. I won’t spoil anything for you, but know that his tricks gave me a fair amount of secondhand fear. Making a living as a street performer — gently heckling strangers until you form an audience and then putting yourself in all manners of vulnerable positions — is far from my natural inclination as a person. I needed to learn how someone lives a life like this. 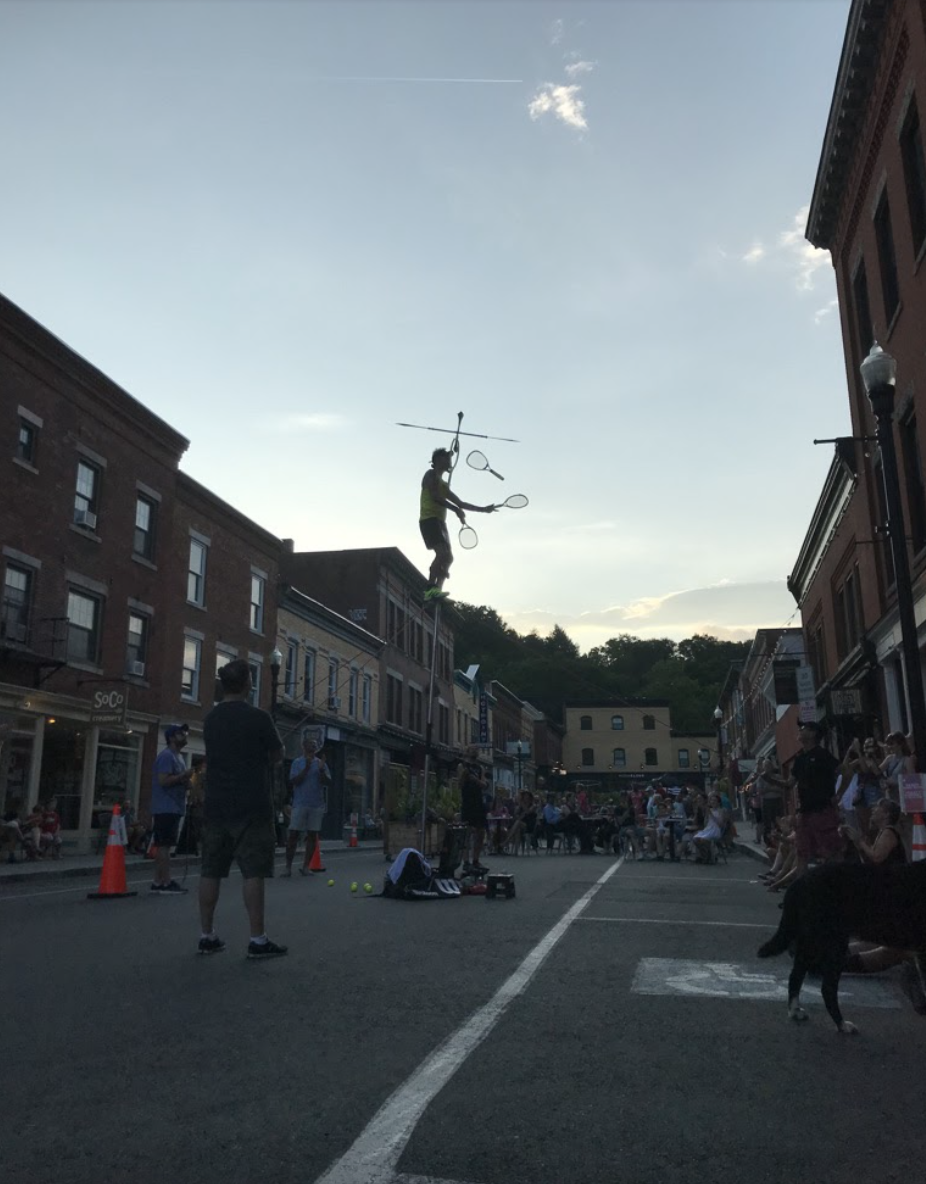 During our post-show interview, Millar told me that he began performing as a teenager. His cousin taught him to juggle, and they began busking on the streets of Sydney, Australia (Millar is Australian). After his cousin went off to college, he began performing solo. I was curious about the specificity of a tennis-themed program, and asked him if he was good at the sport.

“What does it feel like to be in the spotlight?” I asked.

After our interview, Millar’s words continued to bounce around in my head. It makes perfect sense that the activity he has made his entire life feels like home, but I was surprised — and moved — by his answer. And, the more I thought about it, performance as “home” was speaking to a lot of what I was feeling while reflecting on my last week at Berkshire Busk!

“Home” is something specific for each of us, but it’s a feeling that is universal. When I watch a performance, I feel painfully aware that I can’t make anyone else experience what I am experiencing. This weekend, while watching the jazz ensemble Pocket Merchant, I was thinking about the specific way that jazz feels in my brain. It’s a near-physical feeling, which I can best describe as the corners of my brain being touched simultaneously. I love listening to jazz because of this feeling, but I can hardly give that sensation to someone else. 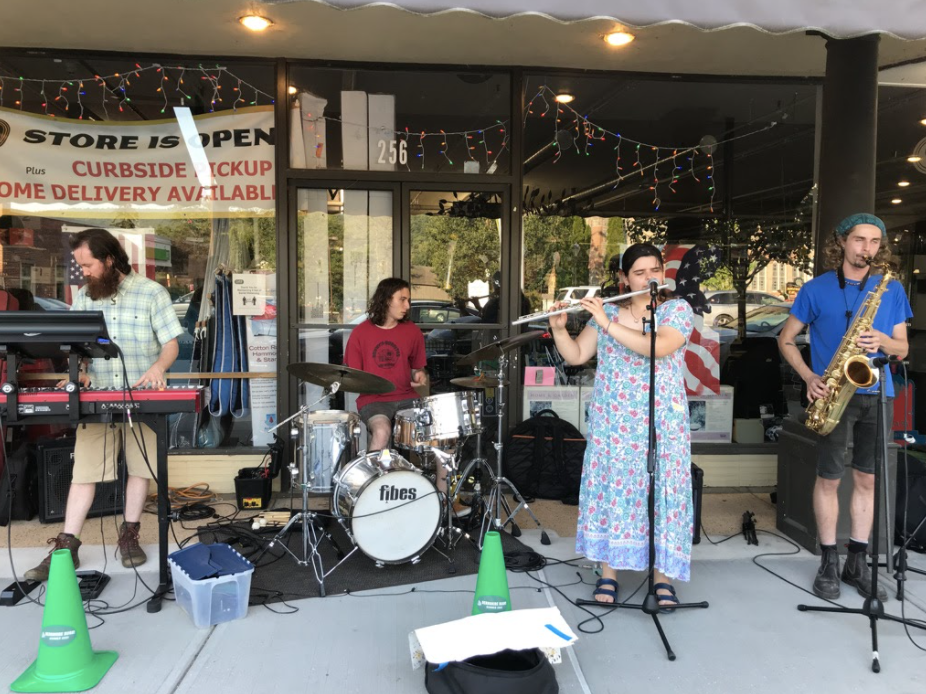 Likewise, I stood for a while watching Janice Hardgrove and the Woodin Boys, and was surprised to find that I couldn’t tear myself from their Celtic tunes. I felt transported somewhere green and still, and also moved — for reasons I can’t quite describe. Whatever it was brought me nearly to tears.
‍
I’m not sure what it does for a reader to hear about these experiences, and while I hope to inspire wonder or delight just like mine, I’m not sure that’s possible. Often, I feel very alone in the specifics of what brings me joy. But at the same time, I feel very safe when I watch a performance. Just as Millar has made his home out of performing, absorbing and enjoying others’ performances feels like home to me. Even if I can’t bring you inside what my home feels like, I hope I can encourage you to think about if you have a “home” in the audience, too.
‍
My favorite moment of my last Berkshire Busk! came at the end, when I stood for a while watching Pocket Merchant finish their set. As the keyboardist began a funky solo, the flutist became enthralled with her bandmate’s performance. She shook — or rather, wiggled — her head, looking totally in what he was playing. Even though she was on the “stage,” she seemed to briefly leave the band and enter the audience as she waited for her turn to solo. As I watched, I felt like I was witnessing someone enter their own musical world. What was moving her was different than what was moving me, but it was just as powerful.
‍
And ultimately, that’s what I want to offer in these blog posts, and what my experience of Berkshire Busk! was all about: even though each of our experiences of the festival are different, I hope we all had moments that felt profound or joyful in a way that was uniquely ours. And I hope that, in whatever small way, these posts have invited you closer to that joy.